Collaborations are a beautiful thing. Intel has announced a new 8th Gen Intel Core processor that comes with AMD’s Radeon RX Vega M graphics. This is the first chip from Intel to come with an AMD onboard graphics.

The new chip is aimed at gamers, content creators and VR and Mixed Reality users with its performance optimised for small form factors. The new chip sports Intel’s quad-core CPU, Radeon RX™ Vega M graphics and 4GB of dedicated HBM2 using Intel’s Embedded Multi-Die Interconnect Bridge (EMIB) technology. In terms of performance, Intel claims the new chip can help computer manufacturers slim down the PC design up to 17mm and can run up to 8 hours on a single charge.

Intel is strangely comparing the new chip with similar systems with discrete graphics from three years ago and claims the performance with the new chip is 40 percent better that can play latest titles in high resolution or edit videos 42 percent faster with Adobe Premier Pro. The first devices to sport the new chip are 2-in-1s from Dell and HP and Intel’s powerful and small NUC. It’s a 1.2-liter system and will come in two variants NUC8i7HVK (with Vega M GH graphics) and NUC8i7HNK (Vega M GL). 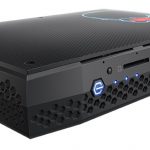 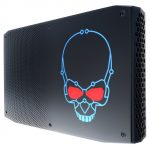 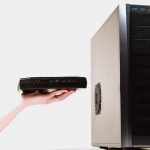