AreusTech from China has created an accessory for the Wii which is as original as the console. Dubbed as Smells like Wii Spirit, it gives out different fragrances according to the game. The accessory attaches to the Wii’s USB port and disseminates scents like burned rubber while playing Mario Kart, sweat aroma while Wii […]

Sony Ericsson turns its attention to the vast accessory market. They have announced a simple clip Bluetooth Speakerphone, HCB-108 which gives you more hours of talk time then your phone can offer. It has a good 25 hours worth of talk time and can last for a month on standby. Sony Ericsson has even […]

Now why didn’t notebook case manufacturers think of this before? Here is Napbook designed to protect your notebook as well as double up as your pillow just in case you wanna cover up for the last night’s sleep, anywhere anytime. It is the brainchild of Hafsteinn Juliusson from Iceland who has just added more […]

Racing simulator fans on Wii are for a special treat as Logitech churns out Wii’s first wireless Force Feedback wheel. The first title to support it will be Need for Speed: Undercover which will come out in mid-November. The accessory has been licensed by Nintendo and the wheel integrates the Wii Remote as well […]

UPDATE: Amazon is taking pre-order of this keypad for $50. Click here. Apart from unveiling the new PSP and 160GB PS3, SCE also announced a wireless QWERTY keypad which easily sits on the SIXAXIS or Dual Shock 3 controller. The keypad will make it easy for the gamer to type in and chat on […]

Brando, the Mecca of cheap gadgets and accessories are now selling a telescopic lens for the iPhone camera. Enclose the crystal cover on the phone and attach the lens. Your iPhone cam has now got the zooming power of up to 6X. Selling at a cheap rate of $19. Product Page [Via Crunchgear]

Bird Electron from Japan has a quirkily shaped peanut speakers clad in leather to make a perfect companion for your on-the-go music. Don’t expect the sound quality to be top notch because it’s the form factor they are banking on. Available in Japan for close to USD40. [Via Akihabaranews]

Introduction of Nintendo Wii opened up a new avenue for developers. The big Accessories market which help to gain more juice out of Wii. Added to the long list of accessories is Logic3’s Wii Keyboard. As the name goes, it helps the user to type in on the QWERTY interface. Keyboard is being pre-ordered […] 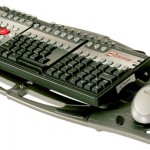 Lapworks are selling a portable desk for PC gamers so that they can enjoy playing their favorite game from their couch or anywhere they want. It is nothing but an ergonomically made stand to keep the keyboard and mouse and takes special care by giving lock plugs so that the peripherals don’t slip off. […]

What was just a parody by one company; another one converted it to reality with some modifications. A Korean company has unveiled a bikini with playback buttons which can control the music of your iPod. This piece of wearable technology will be available in Korea for gals who are lazy to reach their iPods […]