You are here: Home / Old Blog / iRiver G10 To Be Released in August 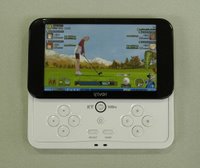 The next likely PSP rival, the iRiver G10 was unveiled at the CES 2006. And now according to the reports, it will be released sometime in August. The iRiver G10 features a 4″ 262k color screen, WiBro connectivity and powered by Windows CE 5.0. Meanwhile, the company has launched two games titles for the G10. They are the Kartrider and Country of the Wind.