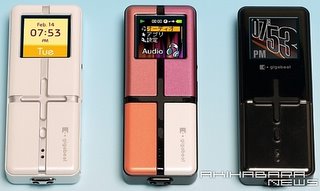 Gigabeat, an upcoming Mp3 player from Toshiba which is gaining publicity lately, has now announced to launch flash based Mp3 players. Gigabeat P Series which has P5L for 512 MB storage memory and P10L for 1 GB storage memory.

They are pretty light as they weigh only 50g and has dimensions of 31.9×82.0x13.2mm. It can also display images on its tiny OLED screen. The launch of this series, will surely have some competition ahead for iPod Nano.