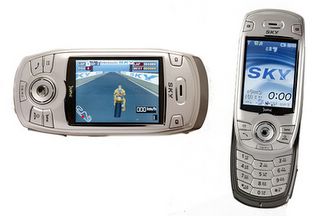 If PSP, Nintendo DS, the speculation of N-Gage 2 was not enough here comes another one. SK Teletech has announced the release of its phone (IM-8300) compatible with 3D graphics. The phone is equipped with a 3D accelerator and a 2.2â€ QVGA TFT screen with wide viewing angle.

IM-8300 also comes with a 2 megapixel (MP) camera which can send the photos taken directly to the printer via PictBrige technology. There’s 80 MB of internal memory and expandable memory supporting Transflash memory cards.

It also features a MP3-player, 3D sound, equalizer mode and stereo dynamics. The two games preinstalled are Moto GP II and The Punisher created and introduced by Marvel.